With an oxygen tank and flippers in tow, it’s hard to imagine how you can possibly dive using a kayak. But with the right boat, this isn’t entirely impossible. You ask now, what is the best kayak for scuba diving? The good news is that there are kayaks tailored for this activity. These are usually narrow, solo kayaks with lavish storage hatches and carved spaces to accommodate the scuba diving equipment.

Also, there are many suggestions from professional scuba divers that I listed here for your own cheat sheet. Check each one, look at the features, and let me know which caught your kayaking mojo.

The Ocean Kayak Sit-On-Top Scrambler 11 promises versatility and from what its features look like, this kayak does what it advertises. It’s a solo kayak with a padded seat and a massive cockpit space to accommodate the legs of the paddler as well as the equipment he’s going to bring on the trip. There are also carved foot wells that will suit different heights. In case the default position of the seat isn’t comfortable to you, just tweak it in four different positions to find your match. Some designs of this kayak are patented so you’re assured that you’re getting a unique boat.

In front of the seat, there’s a six-inch hatch where you can keep small items to avoid getting wet. There are tank wells on the stern and bow to accommodate larger items like flippers and diving apparatus. These are all webbed for added security on your belongings. To top it all, there are molded side handles and paddle parks to make your kayaking worthwhile even in the smallest details.

The Ocean Kayak can carry a maximum of 350 pounds and it can track well even on surfing waves and swelling current. It’s almost 12-feet long and 30 inches wide to provide you the room needed in assembling your scuba diving gears. If you’re thinking what is the best kayak for scuba diving, the Ocean kayak might be the one.

For one person, this kayak is very stable. It can also carry additional pets but it’s likely that you’ll do so during a diving trip. You can also add a trolling motor on this kayak if you have physical limits in paddling.

-The kayak has very large space on the cockpit for a comfortable ride.

-The seat is comfortable and it can last you up to five hours of paddling before you feel a slight strain on your back.

-The design of the hull is perfect for tracking and cutting through the water.

-You’ll need to get bigger scupper plugs if you want to stay dry until you dive into the water. The kayak has a tendency to bail water and let it enter as well.

-The storage hatch in front of the seat isn’t absolutely waterproof.

It looks like the Perception Pescador 12 Kayak is just another boat similar the Ocean brand. But nope, this vessel has its own unique features for divers who are wondering about what is the best kayak for scuba diving. The seat part is carved well with a built-in padded chair for utmost comfort. Its cockpit has a straightforward design where the paddler can easily move around or bring in more equipment.

The best part here is the storage spaces. There are two water-resistant hatches in front of the seat and another one at the back. And that’s not all, there’s a bigger one on the bow instead of an exposed webbed tank well. Anyway, there’s one of this at the stern in case you have some items that you need to be handy at all times. Overall, this is a powerhouse kayak and there’s no question why Perception is one of the top choices for scuba diving.

Aside from the convenience of loading in your stuff, there are also foot braces that you can maximize to reduce the strain on your extremities. The boat can carry a handsome 325 pounds that are already enough for a solo kayaker and his scuba diving gears. It’s a little lower than the Ocean Kayak but not much of a cut.

The kayak is 12-feet long and weighs a heavy 60 pounds. It might be a struggle for an older kayaker to pull it out of the water and bring back to shore but this is just a small issue over its features. It tracks beautifully and that’s one thing that every kayaker wants. So what is the best kayak for scuba diving? You pick one at your discretion.

-The storage areas of the kayak are enormous and more than enough for a scuba diving trip.

-It’s considerably cheap for its price.

-It has great tracking and it’s pretty stable when on water.

-The legroom is large and it’s comfortable to paddle even for long hours.

-The weight is heavy and two people need to carry it to and from the water. 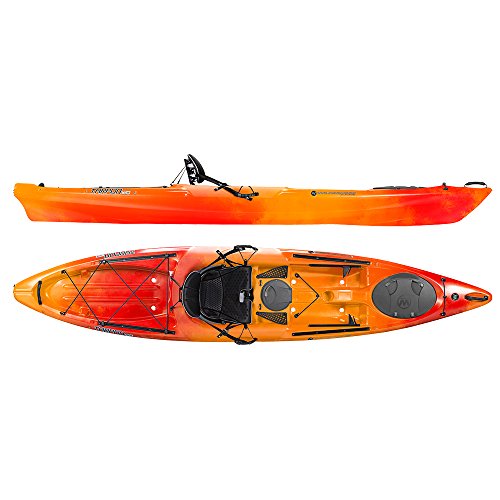 From its name, you know that you’re up for an adventure with the Wilderness Systems Kayak Tarpon 120. Starting from the cockpit, it has a padded seat that faces a storage hatch planked by two small wells with nets where you can tuck small items like watches and accessories. The legroom is visibly smaller than the first two kayaks but it doesn’t deprive the kayaker enough room to move around the vessel. This boasts the Phase 3 AirPro seating system that’s unique on Wilderness Kayaks. Also, there are foot braces on the sides to add stability while paddling.

On the bow is a big storage hatch where you can secure more items that don’t fit in the storage area in front of the seat. To top it all, there’s a massive tank well at the stern with string webbings to keep your belongings secure. This one is bigger than the first two options here and I think it’s the best catch if you don’t want your oxygen tank getting in the way of your legs. But in case you’re wondering about what is the best kayak for scuba diving, this might be it.

The Tarpon 120 is a master racer and it’s easy to maneuver on water. It’s been trimmed down to size as what it’s advertisement says but it’s not really far from the size of the Ocean and Perception kayaks. It’s also heavier than the latter at 63 pounds, but like what I always say, it’s a small issue as long as the kayak is floating steadily and cutting through the water like a knife.

Aside from scuba diving, the Tarpon 120 is made for any kayaking activity like surfing, recreation, or even fishing although there aren’t rod holders mounted on the vessel.

-It has very large storage spaces than the two other kayaks on this roundup.

-The seat is patented and gives a higher level of comfort.

-It comes in a variety of dark to light colors to suit your preference.

-It can keep up with the tracking of bigger kayaks.

-The kayak is durable.

-It doesn’t come with paddles so you have to buy it separately.

-The price is a bit intimidating and almost double with that of the Perception boat.

Malibu, from the name itself, resounds of water adventure and underwater beauty. This is the same with the Malibu Kayaks X-Caliber Fish and Drive if ever you’re thinking about what is the best kayak for scuba diving. It’s the upgraded version of the Pro Explorer models from the same brand and is lauded for its design and build. It doesn’t have a padded seat but if you’re a diver who’s up to get wet, this is the best choice.

The most appealing feature of this kayak is its gator hatch near the bow that gives another seat for the rider. This is a solo kayak and the extra seat would be the best in moving around the boat or angling for your dive. If you want, you can bring in a kid or pet but that wouldn’t be a good decision if you’re diving.

If what you need is storage, just flip the gator hatch open and you’ll get a rectangular space. This is aside from the storage wells on the stern and bow that gives enough room for diving equipment that can also work as a grab line during self-rescue.

The kayak is highly customizable to fit on different kayaking sports together with the accessories that come with it. If you love outdoor adventures like fishing or diving, this one is for you. It’s very stable and it can be used on flat waters or the sea.

-The storage areas are massive and the boat can even house a small kid. What is the best kayak for scuba diving? This one stands out on the list.

-There are two seats on which the gator hatch is used as the second one.

-The kayak has a semi-flat bottom that makes it easy to maneuver even on narrow banks.

-The layout of the cockpit is excellent.

-It doesn’t come with a padded seat so using it for long trips would be a bit straining.

-You have to buy the seat separately but you can use the kayak even without it.

-There are some issues about durability in some models.

So what is the best kayak for scuba diving? These are all excellent in tracking and housing different equipment but it’s still up to you to purchase one which you think will suit your style. What I listed here are all suggested by scuba divers who had tried it by riding a kayak. If you’re also a kayaker-slash-diver at heart, you love these boats just the same.  Do you already have a choice in mind? Let us know and we’ll discuss it below!

The Best Kayak For Kids For Their First Water Adventure

by admin time to read: 8 min