There are many kayaking destinations in the U.S. and around the world. If you have the time and money, you can have worthwhile weekends on a kayak while enjoying the beautiful sceneries on your chosen spot. However, the problem is this: kayaks are hard to transport. These equipment are so big and it might be impossible to load it on the car. If so, look for inflatable kayak reviews and consider purchasing one.

Kayaks of this kind can be brought in a storage bag like an inflatable pool. More often, it comes with a small pump to start paddling easily. I listed here four of the best finds in the market that you can also check out. 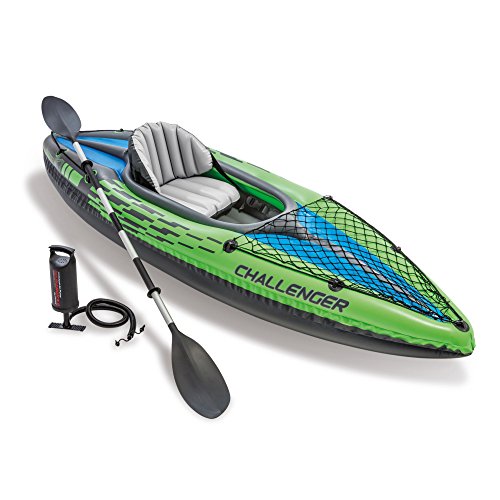 Who said inflatable kayaks can’t be angsty? The Intex Challenger K1 Kayak with Aluminum Oars will prove that a little air could make a top-notch equipment. This is a sit-inside type with an inflatable seat for utmost comfort not to mention the I-beam floors that add up to the stability of the ride. Overall, the material is made of high-quality, welded vinyl that is not prone to punctures. It also has graphics that are at par with hard-shelled kayaks for added safety while paddling slowly on a lake.

In front of the seat is the cargo net where you can tuck your stuff that you need to be handy at all times. The netting would also help in self-rescue if ever the kayak capsizes. This kayak can hold up to 220 pounds of paddler weight that is already huge considering that it’s an inflatable type.

Aside from the kayak itself, there’s also an aluminum oar that’s 84-inch long. This is pretty sturdy and it won’t break easily even during a strong current. If ever the kayak acquired holes, you can utilize the repair kit that comes in the package. With all these features and accessories, I’m glad to be the bring the good news that it’s less than 100 bucks. But there’s also a bad news, though not really bad: it’s selling like hotcakes! You better get yours before it’s too late. You’ll thank me later for these inflatable kayak reviews.

-It can be used on long-distance paddling.

-It comes with a pump and a repair kit to keep you paddling.

-It fits in the compartment of a car if not inflated.

-You can bring your dog on the kayak.

-It’s convenient to inflate and deflate.

-It’s best to inflate it the night before you go paddling to see if there are leaks.

-Anyone who is 6 feet and taller would have to keep their knees up that will make the kayak unstable.

-You can’t fish using this kayak or bring large accessories.

-You have to avoid bumping on sharp rocks to avoid the risk of massive holes that will deflate the kayak really fast.

If you’re not comfortable with a sit-inside setup, why not try the sit on top Sevylor Quikpak 1-Person Kayak? This has an inflatable built-in sit and you’ll also get another cushion that you can mount on the backrest. It looks like a hard-shelled kayak but everything is inflatable for your convenience and you’ll only need five minutes of set up. This is made from 21-gauge PVC material that’s made rugged for use on quiet waters like lakes or rivers. Unfortunately, this might not be the best catch if you’re going on the big drink.

This has the AirTight System to ensure that no leaks would happen as well as a tarpaulin bottom so the kayak won’t puncture even when you skid on the shallow parts of the water. But here’s the good thing. Sevylor has a unique build of multiple air chambers so the kayak won’t deflate entirely when you happen to puncture a certain part. That and these are the inflatable kayak reviews are what you need right now!

Once you’re done for the day’s kayaking, you can maximize the Double Lock valves for easy deflation as well as inflation for your next paddling adventure. This also comes with a pump, a paddle, and a knapsack so for easy transport of the kayak when deflated.

-Taller paddlers can fit here given that it’s a sit on top type.

-It’s very comfortable to use for long distance paddling with its seat and backrest.

-The inflated kayak is very lightweight and it can carry a maximum weight of 400 pounds.

-You can also bring your dog here.

-The kayak is stable and older paddlers who have concerns about stability can use it.

-The paddle is a bit crappy and brittle for continuous use. You have to buy a separate one to ensure a hassle-free ride. Just honest inflatable kayak reviews here.

-The middle part of the kayak sinks slightly on water. It might cause floating issues if the paddler is beyond the weight limit or if he isn’t skilled in navigating with a kayak.

-The air tubes inside the kayak don’t run entirely on the equipment which gives a dragging feeling when paddling.

-The paddle holders are too tough and it’s hard to place and retrieve the oars when needed. 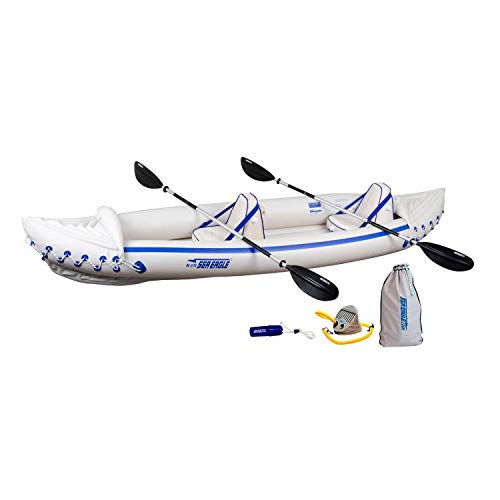 Tandem kayaking is fun and if you’re looking for an inflatable version, there’s something great in store for you. The Sea Eagle SE370K Inflatable Kayak is one of the best finds so far with its saltwater resistant hull, self-bailing drain valves, and more which makes it almost the same as a hard-shelled kayak. This can be easily inflated within eight minutes to carry a maximum of three people. Just take note that only two of the paddlers would get the comfort of the deluxe inflatable seats.

The Sea Eagle kayak has a massive weight limit of 650 pounds so you can even bring your dog if you’re paddling with someone else. You don’t have to worry about the claws of the furball as the material is sturdy (based on actual inflatable kayak reviews). It’s also a good choice for sea kayaking as the hull is equipped to endure the harsh salt water. The K80 PolyKrylar material is reliable and not prone to punctures even when you encounter minor bumps on rocks.

Since this has added features, the overall weight is heavier at 32 pounds. This wouldn’t be a problem since you’ll be launching and dragging back the kayak to shore with a partner paddler.

-It’s a massive kayak that can carry up to three people. Best for bonding with family and friends.

-It comes with a pair of oars, repair kit, storage bag, and a foot pump. The foot pump will help if you’re tired of paddling.

-The kayak set is reasonably cheap considering all the accessories and features that come with it.

-Fast to set up but you have to take the hang of it first.

-It can be at par with a hard-shelled kayak.

-It feels more of a canoe than a kayak. This is based on inflatable kayak reviews from actual users.

-It rides a bit low on water.

-The fins that come in the package are small and you should glue a bigger one if you want to have a worthwhile paddling.

-The kayak is not light due to the additional features and equipment.

If you’re looking for something closest to a hard-shelled kayak, you can check out the Advanced Elements Frame Kayak. It’s a sit-inside type that has almost the same features with a regular kayak but in a lighter weight. The kayak itself is made of three layers of durable plastic that makes it highly resistant to punctures. You don’t have to do anything upon buying this aside from inflating and paddling right away.

This comes with an aluminum rib that runs along the bow and the stern to give you better tracking. It comes with a seat that’s almost the same with a hard-shelled kayak so you can have the same comfort level. It also has string webbings where you can tuck in small objects or use for self-rescue.

This is a bit expensive than the other inflatables but it’s reasonable if you look at the build and overall features. You can use this kayak for hours of long paddling without feeling a strain on your back or arms. If we’re going to look at inflatable kayak reviews, this is one of the paddler favorites.

Take note that this kayak can carry up to 300 pounds of user weight that is way better than the sit-inside type from Intex Challenger.

-This has the same build and features with that of a hard-shelled kayak.

-It has great tracking for an inflatable type.

-The repair kit doesn’t come with a quick dry patch and you have to wait for 12 hours before getting back to the water.

-It’s small for someone with the height of 5’8” and more.

These inflatable kayak reviews will help in finding the one that suits your adventures. Each comes at different size and prices and it’s up to you choose. Once you have something in mind, we’ll be glad to know your choice in the comment section!