No particular date stands out as the origin of sit-on Kayaks, so we assume that some above average IQ Joe, tired of trying to get into a sit-in kayak decided it was too much stress and after pondering the stars, had a eureka moment! Or maybe not. Sit-on kayaks have only grown more popular over the years, especially in the hotter regions of the world, for recreational purposes. Traditionally, sit-in kayaks are still the majority version of the watercraft in production, and for the purity of the art, is used in most kayaking competitions.

The sit-on kayak solves one of the major drawbacks (at least for today's human) of the traditional kayak, which is the process of getting on the kayak. The sit-in kayak (traditional kayak) requires some level of technique to mount, which for beginners can sometimes prove to be a real headache. For others, not being able to maneuver themselves as freely and comfortably as they would like makes the sit-in kayak a less than desirable version for them. Another challenge for the sit-in kayak is that water can get into the cockpit and make it really uncomfortable, something that is not much of a problem with the sit-on kayaks. Using a sit-on kayak presupposes that you intend to get wet and splashed, but that at least is on your own terms. Today, you would find most sit-on kayaks in the recreational category, and we take a look at the best ones on the market.

It may come as a surprise but one of the bestselling kayaks in the market today is an inflatable mini-sized kayak, that's just how the world goes. Intex is a credible brand in the kayaking world, known especially for their solid inflatable watercraft. The rugged polypropene core of the Intex Explorer K2, coupled with an I-beam floor guarantees stability​ and a solid structure that can stand the demands of small water bodies such as lakes and mild rivers (try to stick to these). Weighing in at 35 pounds, the kayak is lightweight and can be conveniently transported for most of your trips. The K2 is a 2-person kayak, which means you can always tag some company along. The kayak also includes a removable skeg for added direction and stability, a grab line and grab handle, a US Coast guard I. D, and it's colour makes it ideal in case of emergency, bright and unmissable. The best part? The Intex Explorer k2 costs less than $100!

VIBE Kayaks are a trusted kayaking name and do not spare any detail on their crafts. Built for everything the world of water has to offer, the Vibe Kayak Yellowfin 100 is an all-weather, sit-on beast of a kayak that offers nothing less than, in the words of the manufacturer, premium fishing experience. Designed with a pontoon-style fishing-stealth Hull, the Yellowfin 100 can track impeccably in all water conditions and types, with perfect slip resistance. Built with an ultra-stable rotomolded single piece polyethylene core, stability and durability are top notch. Weighing 57 pounds, the Yellowfin 100 can support up to 375 pounds and is built for the most complete kayak fishing experience à kayak can offer. Stability, speed, and comfort, the Yellowfin 100 in three words and you don't have to break the bank for it. Upgrade your fishing experience. 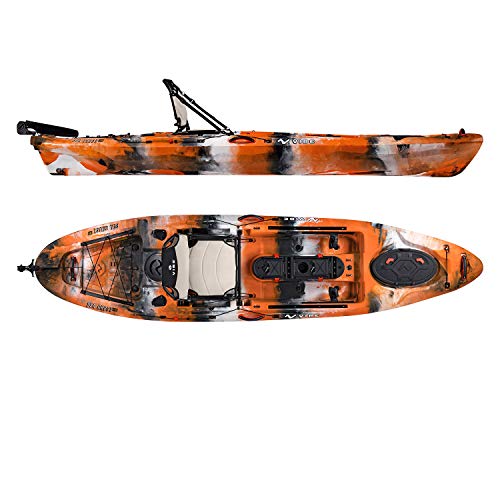 Hauling more than 400 pounds in any given day, the Vibe Kayak sea ghost not only talks a big game, it backs it too. The sea ghost series from Vibe Kayak is speed and stability at its finest for any fishing kayak, and is on the money with its value. From little details as the seat, a dual position double-ventilated vibe hero seat, to its pontoon-style Hull, everything about the sea ghost 110 screams quality and a great experience. The kayak boasts a toe-controlled rudder, two side bungee paddle parks, six top-loading gear tracks, two flush-mounted fishing rod holders, a tackle toss tray, a rear storage area with bungee tie down, two tackle tray holders with FIT Plano tackle trays, amongst other nifty accessories and detail that make the Vibe Kayak sea ghost 110 a must have.​