Best River Kayaks That Work As Advertised (And Even More!)

Flatwater kayaking is probably the most common nature of paddling. This doesn’t require much effort as the waves are calmer than the sea and even a solo paddler can easily cut through the water. Still, getting the best river kayaks would make a difference in treading the waters. Recreational kayaks are the typical choice for this but any other type would do depending on the activity that will be done on the boat.

But to give you some fresh options, I listed some of the topnotch choices here that have been tried and tested by river kayakers themselves.

If you’re going to paddle on a quiet river, the best buddy is the Old Town Canoes and Kayaks Vapor 10. This boat has a sit-inside build but the cockpit is less sealed than its usual counterparts. There’s enough room to move the legs as well as bringing in some equipment and small items. You can utilize the carved well at the stern or stuff your bags at the bilge of the vessel together with a pump if you’re installing one.

The Old Town kayak comes with a built-in, contoured seat that you can adjust depending on your comfort level. On the rim of the cockpit is carved paddle rests so you can secure your oars if ever you’re doing something in the middle of the water. This is made of one layer of polyethylene which is enough to withstand mild freshwater current, or at a few times, saltwater.

For added comfort, this kayak has a footrest system and thigh pads that fit on almost every user. It provides a leveled up stability when maneuvering the vessel. Just one of the best river kayaks, indeed.

The best part of this kayak is the cockpit that can accommodate up to 300 pounds of single-user weight. It’s spacious enough and is actually an advantage when paddling on calm waters. Just make sure that you use it on lakes, rivers, and any quiet drinks.

-The kayak is spacious and it can hold a handsome amount of weight.

-The seat and pedals are nothing but comfortable.

-It lasts long and a good catch for its price.

-Trying this on whitewater would result in a water-filled cockpit.

-It doesn’t come with a paddle.

-There’s no specific warranty for this kayak, though it might not actually be needed. 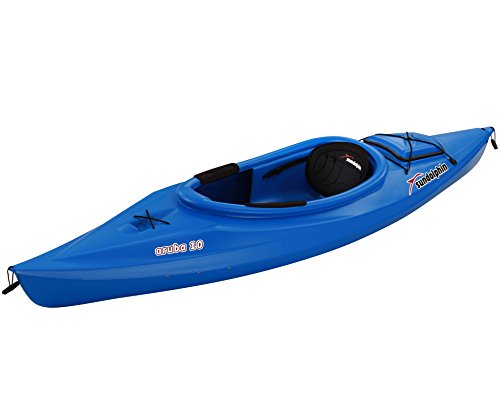 In case you’re all for tracking and stability, the Sun Dolphin Sit Inside Aruba 10 is one of the best river kayaks for you. It’s almost the same with the Old Town Kayak except for fewer storage spaces and a more sealed cockpit for a paddler who wants to minimize the splashes. But just like the first one, this has an adjustable seat and footrests that adds comfort to every user.

There’s a hatch on the stern that you can use as a storage area. It’s protected with a string webbing although it’s doubtful if the cover is water-resistant enough. The rigging on the bow isn’t really that much and it might not be the best tool if you’re thinking of self-rescue. It can carry up to 250 pounds which is a little lower than the first listed kayak.

The takeaway on this kayak is its material. This is made of high-density polyethylene that’s UV-stabilized to reduce the tendency of fading and cracking if exposed to intense sunlight. The boat also has a spray deflector collar if you’re going to mount a spray in case the cockpit gets filled with water. One thing is for sure: this kayak is crafted for river paddling.

If you want a bonus, this kayak comes in many plain colors to match your style. But aesthetic wise, this isn’t as amazing as the Old Town Kayak. This is only a small issue if you’re going to focus on its performance while on the water.

-It tracks well and remains stable in water the way the best river kayaks do.

-The kayak is light and very maneuverable even for beginner paddlers.

-This is spray skirt ready but you have to buy the accessory separately.

-Color-sensitive kayakers may not find this appealing. 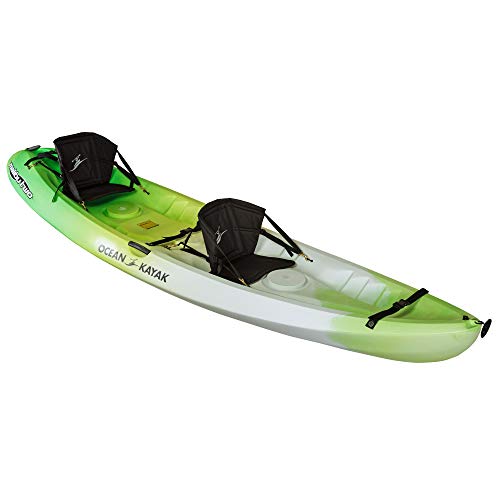 A tandem kayak is a sought-after boat due to its ability to hold two to three people. If you’re also looking for one, don’t miss the Ocean Kayak Malibu. This has a very spacious sit-on-top cockpit with adjustable padded seats for you and your partner’s comfort. It can carry up to 425 pounds which is equal to roughly two adults and a small kid. One of the best river kayaks for family outings by the river!

If you’re paddling solo, you can maximize the three-seating position including the middle part of the boat. The footwells carved on the kayak are overlapping so you can shift positions effortlessly. In front of each seat are storage wells with an extra one in the middle in case you’re bringing a third paddler.

Keep in mind that since this kayak can accommodate up to three people, there are fewer storage spaces on the bow and stern. Still, that’s a small issue given the fact that any leg length would find this vessel comfortable to use even for extended periods.

The good thing about this kayak is it can be used in the ocean in case you want a break from the usual flat water. You can even convert this into a fishing kayak by installing some rod holders. However, this could be a little heavy to launch into the water by yourself. Anyway, that’s the reason why you have someone else to paddle, right?

-The seats of the kayak are of high quality.

-It’s a versatile kayak that can be used on lakes, rivers, and even on the ocean.

-The kayak’s material is very solid just the way you’ll expect it from the best river kayaks.

-You can bring in two other people or a pet with you.

-The kayak doesn’t come with a paddle.

-Get ready to have water get in and you get wet.

-There isn’t much room for large equipment.

If you want your river paddling to be on the next level, I suggest that you check out the Vibe Kayaks Yellow Fin 100 Kayak. This is a solo boat with a hero seat and four flushed mount rod holders to make your river fishing easy. You don’t have to worry about storing your angler equipment as there are two water-resistant hatches in the middle of the vessel and on the bow. If you need more space, you can utilize the well at the stern that’s secured with a string webbing.

If you want more convenience, you can use the two tackle trays not to mention the well-crafted legroom with footrests. Overall, your friends would envy this powerhouse kayak once they saw it in the river. It can carry about 375 pounds of solo user weight and equipment. This is just one of the best river kayaks!

This one would exceed your expectations as it already comes with scupper plugs and a long-lasting paddle. Based on its build, I can say that this can withstand the ocean and sea waters. You know what’s the best part? It comes in different colors in a bursting paint style. If you’re up for buying a kayak that has it all, you’ll regret missing this one.

For its price, there’s nothing else you can complain about. Sure, it’s pricey but the features would speak for itself.

-The features are massive and more than what you need for almost all river kayaking activities.

-The storage space is also enough for carrying equipment and different items while paddling.

-The paddle that comes on this kayak is made of fiberglass that’s not easy to break even during strong currents.

-The price is a bit overboard for those with a small budget. But if compared to the features, it’s the best purchase.

-The seat might be a little brittle for heavier users. It might have a tendency to break.

If you’re a certified angler, the best river kayak would be the Malibu Kayaks X-Factor Fish & Dive. This has massive storage spaces equipped to hold your catch. It has four massive storage hatches and multiple rod holders in front and at the back of the boat. This is one of the best river kayaks in terms of weight capacity as it can carry up to 625 pounds without losing its buoyancy.

The stern of this kayak bears a storage well secured with string webbings. Also, its hull has a high rocker design that allows better tracking even on harsh currents. It’s complete with fishing features including the small details that would make a difference.

However, this kayak is a bit long and it might be difficult to launch into the water on your own. And since this has a massive user weight limit, you can bring in a kid to sit on the hatch-cum-second seat. There are no padded seats here and you’ll use the carved part to settle. Still, you can install one on your own.

This is trolling motor ready and it even has cup holders for your convenience. It’s 14-feet long and as far as kayakers can assess it, it’s a massive yet wonderful boat for long tours by the river or even the sea.

-It bears the Malibu quality every kayaker loves.

-This can be a two-seater kayak as long as you tag along with a small kid.

-You have to buy a padded seat if you want to have added comfort.

-The price is the most intimidating among those listed here.

The best river kayaks I listed here are just some that you can find in the market. Do you know more? Share it with us in the comment section!

You know water sports - you know me! My life is all about it. Kayaking, Paddleboarding, Fishing, Snorkeling and so much more. I love to share my passion and knowledge with all of you.
Table of Contents
Primary Item (H2)Sub Item 1 (H3)Sub Item 2 (H4)
Sub Item 3 (H5)
Sub Item 4 (H6)