So you think you’re ready for the rapids? Many kayakers feel a sense of achievement once they acquired the skill needed to paddle on whitewater. Classes II to VI waters are highly dangerous and it takes a lot of knowledge (and guts) to launch a boat and paddle without being thrown away on the big drink.  For first-timer rapid kayakers, it’s best to get the beginner kayak for whitewater that works on tracking, stability, and durability against the harsh nature of fast-moving water.

One important note to remember is that recreational kayaks, be it inflatable or hard-shelled, can’t just be used on whitewater trips. These are either not too durable to withstand the scraping that may happen or it’s not ergonomically viable to last on such strong conditions.

Before buying a specific kayak, it’s best to check the river you’re planning to kayak on. Extended periods of kayaking on the rapids would work on intermediate boats while those who are just starting to weather the rapids would find comfort on entry-level vessels.

There are many kayak models that you can choose from, for sure, but there are a few that can give major brands a run for their money. If you’re serious about the whitewater paddling, check these two premium options here:

From its name alone, you can already guess how much quality you can get from the Riot Kayaks Magnum 72 Whitewater Kayak. This has a total length of 7 feet and 11 inches for an ultimately maneuverable vessel. When it comes to whitewater kayaking, shorter but slim kayaks are the best options as it’s easier to control and ‘wear’. With that, Riot Kayaks is a beginner kayak for whitewater without the fuss.

To ensure that you have your focus on surviving steering waves, this boat has the unity seating system and a floating backrest to reduce the strain of prolonged sitting. The cockpit is not less of convenient as it’s perfectly contoured to let the torso move during twists and paddle strokes. Aside from that, this kayak is equipped with flotation bags on the front and rear to ensure your safety if ever you capsize in the middle of the rushing water.

Overall, this sleek-designed kayak would be best for beginners who had just mastered their maneuvering skills. It also has an excellent rocker profile that will add stability to a strong current. The shape of the bow and stern, on the other hand, reduces the tendency of being drifted away in different directions. It bears a V-shaped hull that, as we know, is a master tracker.

Even the smallest details on this kayak make a difference on the paddling experience. Riot Kayaks aims to provide paddlers the equipment they need and it’s fulfilled on this boat. The Magnum 72 has an adjustable creek and thigh braces, drain plug, anti-theft bar, and flotation devices.

If you’re the risk-taker kayaker who’s fond of creeking, this one would be the best choice in going down those steep slopes. Keep in mind that this has a maximum weight limit of 180 pounds that’s enough to house a heavy paddler.

The kayak weighs 44 pounds that is considerably light for such a heavy-duty, beginner kayak for whitewater

-It’s the right combination of physical profile and science. Magnum 72 is an exquisite creeking kayak.

-For the price, it’s almost the same with high-end recreational boats.

-Easy to maneuver and very buoyant

-It’s a small kayak that might not be best for tall paddlers.

-No storage hatches that can hold small items 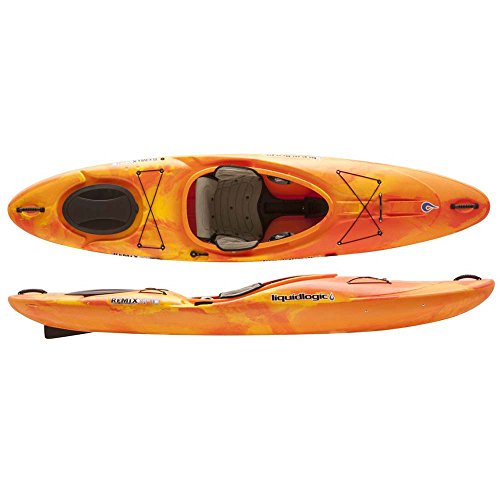 If you’re in for a top-dollar creeking boat, the Liquid Logic Remix XP10 Whitewater Kayak won’t disappoint you. This is longer than the Riot Kayak at 10 feet and 3 inches but also heavier at a slight difference of five pounds. The Liquid Logic boat can be used on flat water for speed and for whitewater with its extreme buoyancy and agility. It comes with a detachable skeg for flatwater use that you can tuck away to maximize its stability in fast-moving streams.

This has a very comfy and plushy cockpit that will make your whitewater adventures more convenient. It also has storage hatches in case you need to bring some stuff with you while you fight the crashing waves. It’s a big boat but it’s surprisingly maneuverable on the rapids like the Riot Kayak. Overall, this can be the beginner kayak for whitewater if you’re heading to a Class III or IV adventure.

One of the kayaker favorite features on this boat is the massive storage spaces. You can actually ‘bring the whole household’ here. The cockpit can also be a storage area too for the things you need to be handy. But for an action-filled kayaking, the storage hatches would save the day. Just make sure that you seal the skeg bolts using silicone.

-The skeg is a massive speed booster when the kayak is used on flatwater.

-Very stable as much as the cockpit and seat is comfortable

-There is a waterproof hatch on the rear.

-The slots for the skeg bolts tend to wet the rear hatch. You have to seal it first if you want to stay as dry as possible during a whitewater adventure.

-It doesn’t have any cup or rod holders. It’s a whitewater kayak so that shouldn’t be an issue in the end.

-It’s hard to find a spray skirt that fits like a glove on the kayak.

-The footpegs tend to peel easily when you kick too hard.

-A bit pricey than the Riot Kayaks

Any of these two could be the best beginner kayak for whitewater adventures. Consider your body size, feature preferences, and budget. You’ll surely get a boat that would be a total swell for your journey into the rapids. Just don’t forget to master your skills to make the most out of these vessels. Share your paddling experience with us!

The Best Kayak For Kids For Their First Water Adventure

by admin time to read: 4 min

Kayaking Tips How To Increase Kayak Speed? Here Are Some Ways To…
0